The Temple of Vesta and the vestal virgins in ancient Rome

There are many ways that allow you to reach one of the most important archaeological areas in the world, the Roman Forum. Every year this huge archaeological site is visited by many tourists from all over the world.

Between Capitol and the Palatine Hill, two of the seven hills of Rome, it stands the Roman Forum. Originally, the area was occupied by a marsh called Velabro. Later, this marsh was reclaimed by the Etruscan emperor Tarquinius Priscus. The waters were drained into the Tiber River from the sewer system, the Cloaca Maxima.

In the seventh century BC, some buildings were built in the area for political, judicial, religious, commercial and social reasons. The Roman Forum was getting the center button of the city.

To understand how the forum was designed we can consult the book V of the De Architectura, of Marcus Vitruvius Pollio, Roman architect and writer. The author says that under the arcades there were supposed to be “the bankers’ shops and apartments on the floors over them, which are constructed for the use of the parties, and as a depot of the public revenue”. The size of the forum should have been “proportionate to the population, so that it be not too small to contain the numbers it should hold, nor have the appearance of being too large, from a want of numbers to occupy it”. The width should have been “two thirds of its length“, with rectangular plan, ideal for shows. In addition, the basilicas should have been ” situated adjoining the forum, on the warmest side”, so that traders could get together there in the winter, without being disturbed by the cold.

During the last years of the Roman Republic, the area of the forum was marked by impressing basilicas (where public meetings were held), and then monumental temples, dedicated by the Senate to deified emperors and finally statues and the famous rostrum, so raised platform from which Rome’s orators tried to draw a crowd and sway public opinion.

As regards Ancient Rome’s structures they originally were more colorful instead of how they appear today. The Roman used to ornate buildings and monuments with colored marble including red porphyry and painted statues. The painting was applied to the clothes, to the breastplate of the emperors, to the hair and to the details of the eyes, but never to the skin. The effect would be amazing!

Due to the decline of the Roman Empire, in the 4th century, a new period of instability began. The same thing happened to the Roman Forum: it was sacked. Architectural parts were taken off to build new Rome’s constructions, to the point of losing its importance! In the 15th century the Forum was abandoned and filled in by a thick layer of earth, becoming a pasture known as Campus Vaccinus.

The Temple of Vesta

The Temple of Vesta is located in the Roman Forum, this is perhaps one of the most sacred spots in Rome. Inside, a sacred fire burnt day and night. The flame was tended by priestesses known as Vestal Virgins. Keeping it lighted would ensure social cohesion.

The cult of Vesta was practiced not only in Rome but also in the most ancient religious places of Latium. This cult insisted that the goddess was venerated as a divinity of fire and domestic hearth, identifying herself in the flame.

But why was fire so important in ancient Rome? This tradition has its origins in the early Roman settlements on the Palatine hill. At that time, the fire was placed by the Romans in the heart of the house, the so-called “domestic hearth”, around which the family gathered in veneration and recollection. The father of the family was considered the priest of this cult. Over the centuries, the cult of sacred fire moved to a small circular temple located on the Via Sacra. For many centuries the Temple of Vesta and the House of the Vestal Virgins were the most important religious center of the ancient Rome.

According to tradition, the Temple of Vesta is one of the oldest buildings in the Roman Forum. It was built following the request of Numa Pompilius, the second king of Rome. Over the centuries, the building had undergone several restorations, due to numerous fires, including that of 241 BC. followed by that of 210 BC.

The most devastating fire happened in the 64 AD, during the Flavian Age and caused by the emperor Nero. This catastrophe was followed by a further fire in the 191 AD. The few remains visible today are the result of reconstruction intervention dating back to the end of the second century AD, by the will of the empress Jiulia Domna, consort of Septimius Severus. Today we can admire some rests of the high podium, some Corinthian columns – at the time twenty – which formed the colonnade of the Temple. It held the cylindrical cell with a central opening from which the sacred fire smoke. 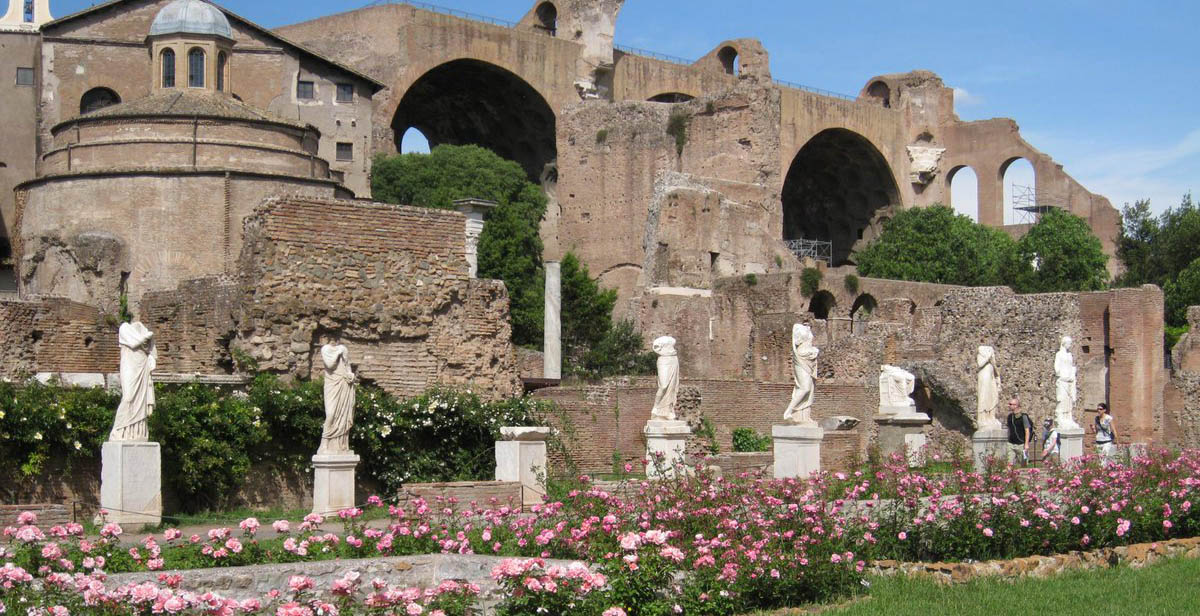 According to Roman authors, the cult was founded by Numa Pompilius, a roman King who ruled around 715 to 673 B.C.

The cult of Vesta was kept alive by Pontifex Maximus and priestesses. The Pontifex Maximus presided over the College of Pontiffs; an organ set up by King Numa Pompilius. He had absolute and complete power. He also had the power to inflict punishments on Vestal Virgins if they had failed to attend to their duties they were punished by a beating while the violation of the vow of chastity by burial alive.

In addition, the Pontifex Maximus could consecrate these young girls between the sixth and tenth year of age, choosing them from the best Roman families.

But who were the Vestals Virgins? They were very young girls, aged between six or ten, born to patrician parents, and free from mental and physical defects.

The consecration of Virgins happened through a public ceremony. It was at this time that the Vestal Virgins would have sworn to Vesta’s service for 30 years, divided as follows: ten years as a student, ten as a minister of the cult and ten as mistress of novices. During this period, there was an obligation to observe the vow of chastity, morality and organize sacred ceremonies throughout the year. Once the thirty years were over, the Vestal Virgins could marry.

Sources tells us how they were dressed and how their headdresses were.

On the day of the consecration the hair was cut short and offered to the goddess Vesta. Dressed in white, the color of purity, the Vestal Virgins wore stola, long gowns worn by Roman matrons.

And also they wore the suffibulum, a short, white cloth similar to a bride’s veil, kept in place with a brooch, the fibula. It was a real jewel, a medallion full of gems hanging on a very rich necklace. It was the hallmark of the priesthood.

Around their heads they wore a headband, the infula, which was associated with Roman matrons. 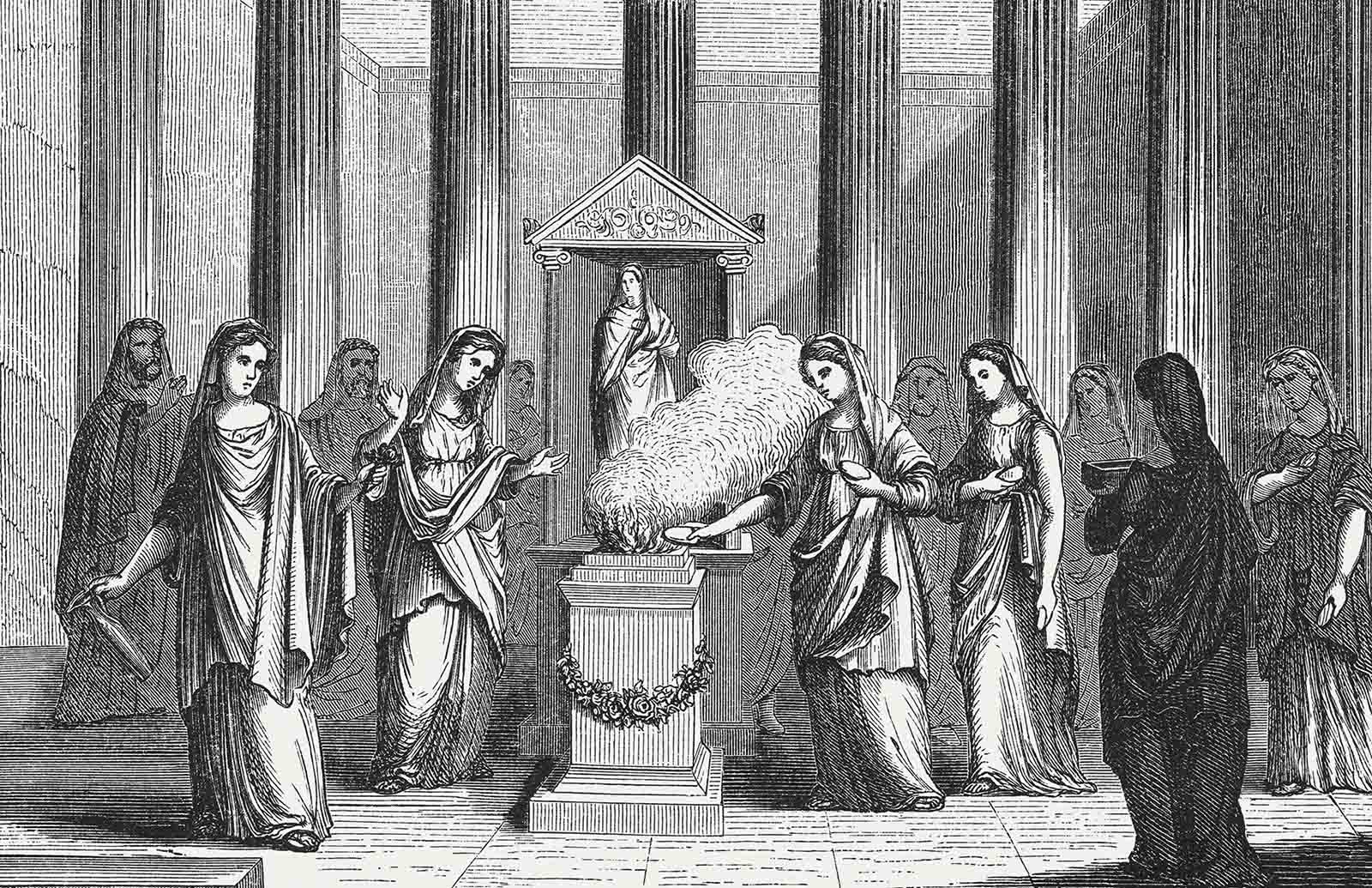 The social role of Vestal Virgins

The Vestal Virgins didn’t live a life of recluse as you might think. They were free women who took part in the most common leisure moments of those days, including gladiator games. They had reserved seats in front rows, enjoying an excellent view. They were engaged in religious activities, processions and sacrifices. Thus, they fulfil a particularly important societal role and they were also accorded a lictor when their presence was required at a public ceremony. It is curious that

if they had met a sentenced to death in the street, the latter’s sentence would have failed.

Vestals would have lost their benefits in case of breaking their vow of chastity. The consequences of their acts would have been awful: they would have been bricked up in a chamber and left to starve to death. And also punishment for their sexual partner was just as brutal: death by whipping.

Any cookies that may not be necessary for the website to function and is used specifically to collect user personal data via analytics, ads, other embedded contents are termed as non-necessary cookies. It is mandatory to procure user consent prior to running these cookies on your website.