The secrets of the Domus Aurea 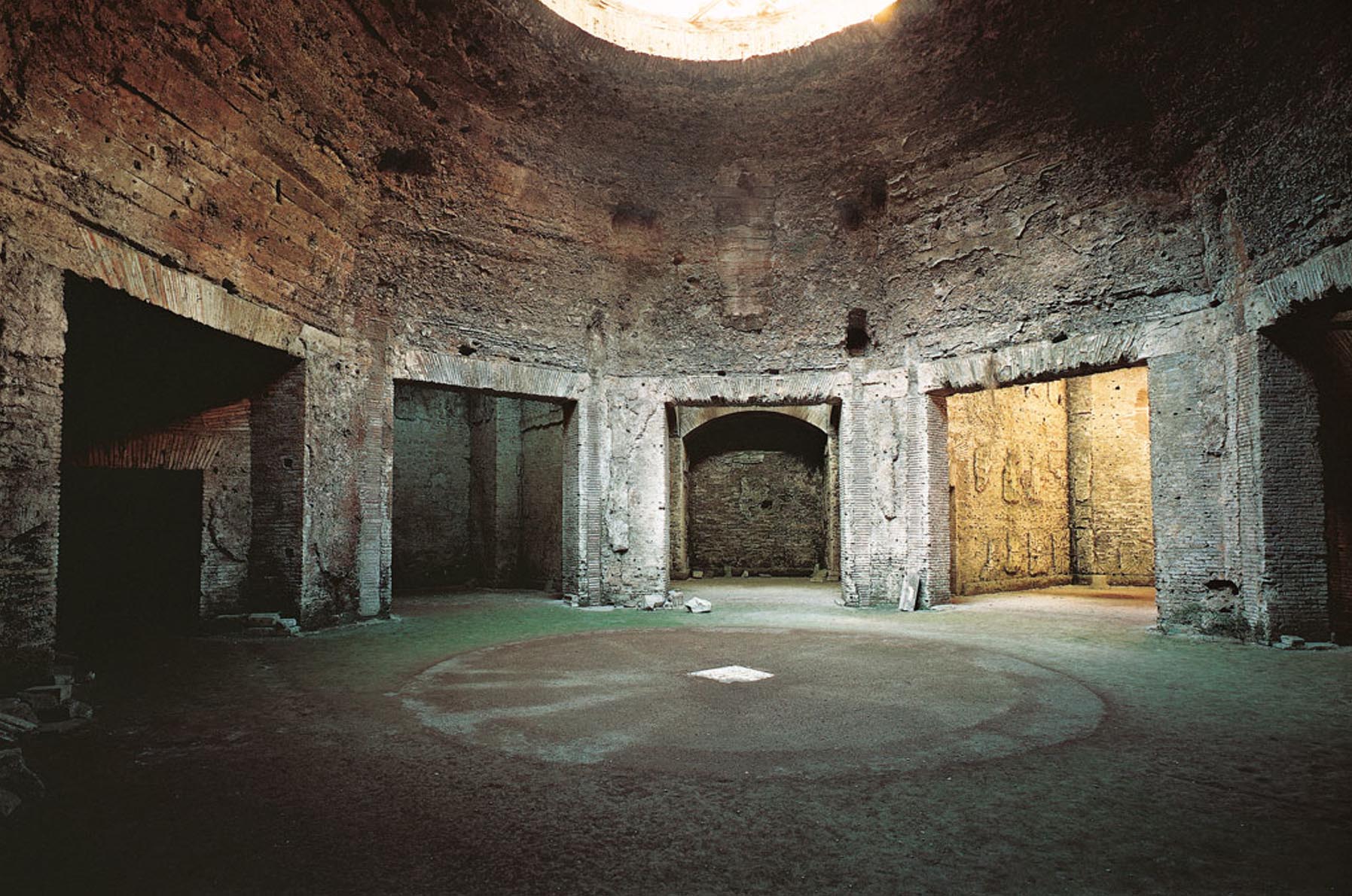 Nero and the Golden House

Just a few steps from one of the most visited monuments in the world, the Colosseum, we can admire a place that resists over time, the Golden House. We are located in the Oppian Hill park. In the past, it was the vital urban space for the Roman citizens, while nowadays is considered a place for walking and recreation. Right here are the remains of one of the most important imperial palaces of ancient Rome, the Golden House, in Latin Domus Aurea. This grandiose work was carried out by the Emperor Nero’s order, the last emperor of the Julio-Claudian dynasty.

At the age of 17, Nero rose to power, as an adopted son of Emperor Claudius, in 54 AD. He began to promote the first measures under the careful guidance of the prefect Burro and Seneca, his tutor. Before becoming emperor, he had married his cousin Claudia Octavia even if he was interested in another women, Poppaea. She was so beautiful and ambitious woman, described by Tacitus in this way: “she had every female merit, except honesty”. Under the constant pressure of this famous woman, Nero repudiated Octavia, accusing her of sterility and adultery and he had her exiled and then killed. After eleven days, he marries Poppaea.

The historian Suetonius, in De Vita Caesarum, outlines the profile of the emperor: “Nero was born at Antium nine months after the death of Tiberius, on the eighteenth day before the Kalends of January, just as the sun rose, so that he was touched by its rays almost before he could be laid upon the ground. Many people at once made many direful predictions from his horoscope, and a remark of his father Domitius was also regarded as an omen; for while receiving the congratulations of his friends, he said that “nothing that was not abominable and a public bane could be born of Agrippina and himself”.

The prophecy came true. Nero became the symbol of cruelty and infamy for the city of Rome. The author then adds other information about Nero such as he was a lover of the arts, including music, singing and poetry, but he was also a great money launderer, using them mainly for construction. In fact, between 64 and 68 AD the emperor built “a home as befits a man”: the Domus Aurea.

Description of the work

A few numbers tell us how massive the Golden House was. Composed of 150 small and large rooms, for a total extension of 16,000 square meters, the equivalent of 3 football fields; about 30,000 square meters of walls decorated with frescoes and stuccos and vaults up to 12 feet high.

At the time of Emperor Nero, the Golden House was completely covered with gold, precious stones, shells and pearls, while the ceilings of the dining rooms were characterized by movable ivory tablets. Petals and perfumes would have delighted the guests so appreciated by the emperor. This shows that the Golden House was not only intended as a place of residence for the emperor but also as a place for recreation and otium.

Placed at the entrance of the Domus Aurea, next to the Colosseum, there was a colossal gilded bronze statue. It was 35 feet high and supported by a 11 feet high pedestal. it seemed even more imposing. This grandiose statue, which represented the emperor in the guise of the sun god, was made by the Greek sculptor Zenodoro.

Through these numbers we can understand how immense the Golden House was. Built in just 4 years by the architects Celere and Severus, the emperor’s residence included the area of the Palatine Hill, the slopes of the Esquiline and part of the Caelian hill, in total 250 hectares of land.

One of the most important rooms of the Golden House, was the Octagonal Hall, in the eastern part. The room 128 was flanked by a series of courtyards that open on the sides and during the years it has aroused the interest of many researchers for the high technical and architectural value. It is characterized by the presence of pavilion dome, to the top an oculus and surrounded by a nymphaeum, preceded by a staircase on which the water flowed which refreshed the environment.

Sources tell us that the Octagonal Hall was served as a banquet hall, very luxurious and scenic as well. However, it is said that the hall made a whole circle in 24 hours such as Earth. All thanks to a wooden structure that made it rotate slowly and to complex hydraulic mechanisms. Picture Nero’s emperor in the middle of the room, sat on a throne, identified as the sun god, while flower petals rained down and perfumes were poured from above.

Inside, there are remains of rich pictorial decoration, attributed to Fabullus. Information about this roman artist came from the author Pliny the Elder. He provides us with curious anecdotes, including the fact that the artist always painted in toga, even on-site scaffolding. Here four adjectives to describe Fabullus, as we can read in this latin sentence: “fuit et nuper gravis et severus idemque floridus ac umidus pictor F.”.

The adjectives “gravis et severus” probably refer to his strong and determined personality, while “floridus and umidus” should refer to the typical technique of his painting. The term “floridus” refers to the fact that in the time of ancient Rome, the colors used in the art of the fresco were called “floridi”. They were very precious colors that were bought by the client. Of all these the most precious was the purple color because extracted from the shells.

In the room of Achille in Sciro, brought to light in the twentieth century, the mastery of the painter can be appreciated. After 5 months of consolidation and restoration works, today, even if only to a small extent, we can imagine how the frescoes in Nero’s time were. Frescoes are considered an example of “fourth style” painting. In this fresco, the illusionistic architectures stand out against a yellow background, as well as geometric motifs enriched by blue and red painted ornaments. In the center of the vault we can find the representation of Achilles, hidden by his mother Teti among the daughters of Nicomede on the island of Skyros, to escape from the Trojan war. In this room the marbles cover over half of the walls.

After Nero’s death in 68 AD, most of the buildings were demolished to make room for new architectural complexes, including the Palace of Flavian emperors on the Palatine Hill, the House of Tiberius, the Flavian Amphitheater and the Baths of Trajan, located on the top of the Oppian Hill.

In the Middle Ages this area was full of vegetable gardens and vineyards. the area became totally abandoned and the traces of the Golden House were lost for many centuries. Only in 1480 did something surprising happen. A young Roman citizen walking in the Oppian Hill park fell into a hole. He found himself in a dark cave frescoed by plant forms, human and animal figures, inserted within landscapes and fantastic architectural perspectives. He didn’t know he was in the famous Golden House.

The discovery was so important that it aroused the interest of the greatest artists of the sixteenth century. It is said that some painters, including Pinturicchio, Filippino Lippi and Signorelli, descended into the cavities of the Oppian Hill to go, by torchlight, to admire these pictorial decorations. And here in 1496 the term “grotesque” appeared for the first time, probably coined by the same artists to define the different decorative systems of ancient painting rediscovered in the Roman caves. In particular, the grotesque motif was studied by Michelangelo, Pinturicchio and Raphael.

Raphael in 1519, under the pontificate of Pope Leo X, was called to fresco the rooms and the loggia of the pontiff. The motif chosen for the loggia was entirely grotesque: biblical scenes framed by illusionistic architectures connected by precious pictorial ornaments, angels, birds within rural landscapes. Furthermore, Pinturicchio was also strongly influenced by the Golden House, so much that he used the motifs for the decorations of the Borgia apartment, in the Vatican, and for the Piccolomini Library, in the Cathedral of Siena.

Any cookies that may not be necessary for the website to function and is used specifically to collect user personal data via analytics, ads, other embedded contents are termed as non-necessary cookies. It is mandatory to procure user consent prior to running these cookies on your website.